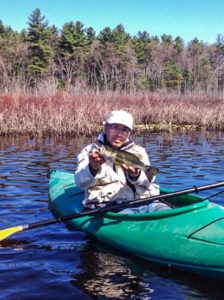 Kris Kendrick with a nice catch from the 2013 Parker Paddle. Photo by Kevin Correa

Everyone caught fish and some boats were in double digits this year for the chapters annual Parker Paddle to Crane Pond. We welcomed some new faces to the event as well. A dozen chapter members took part in the morning fishing which ended in a wonderful riverside BBQ lunch prepared and executed by chef Mike O’Neill. The weather cooperated with cool but comfortable temperatures. Partly cloudy skies and a light breeze may have been helpful factors in making the fish very aggressive.

Following lunch members took part in our traditional clean-up of the area that resulted in several trash bags being filled leaving the area cleaner than when everyone arrived. Since we’ve claned up the same area over the last four years, we have noticed a year to year improvement in how much trash accumulates in this area.

More photos from the event can be found in the Photo Album titled Parker River Paddle 2013.