From our Newsletter by Jim MacDougall:

Thanks to our past President, Kevin Correa, the Chapter’s restoration project in Boxford has been highlighted in this issue of “Trout”! Check it out! Kevin, a professional writer, submitted this article sometime ago to the editors of the TU magazine. Great job Kevin and much deserved recognition to the hard work of the members of this Chapter. You all earned it. Congratulations. 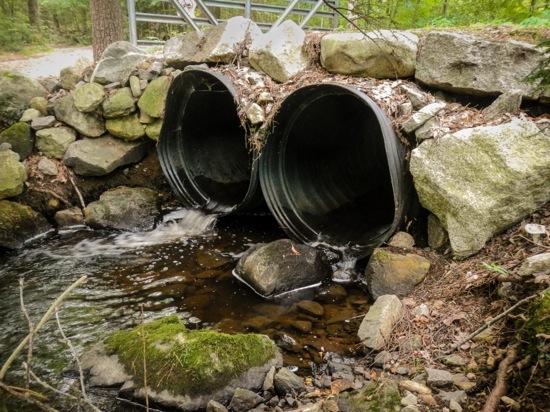 Nor’East Chapter Completes Culvert Replacement
Four years after emerging from a long dormancy, the Nor’East Chapter completed a culvert replacement resulting in greater stream connectivity. The worksite was at Crooked Pond Brook in the Town of Boxford, Mass., located 25-miles north of Boston.

The goal of the project was to improve passage for native brook trout and other wildlife. The former perched culverts made it impossible for fish, invertebrates, amphibians and small animals to move upstream during normal to lower stream flow conditions. The replacement culvert provides a more natural transition for wildlife to access ecologically pristine upstream reaches.

The replacement, which was partially funded by an Embrace-A-Stream grant, arose from an Eagle Scout project. In 2010, Eagle Scout candidate Eric Murrer conducted an investigative study of the surrounding watershed. His work—which was supervised by Jim MacDougall, a chapter member and professional wetland scientist—yielded a habitat score of 85% and a thriving macroinvertebrate population of early stoneflies, mayflies and caddis in Crooked Pond Brook. After reviewing the study, the chapter voted to work toward rectifying the inadequate culvert.

The work at the site was a partnership of many local organizations, including the Town of Boxford, Northeast Massachusetts Mosquito Control, the Boxford Trails Association/Boxford Open Land Trust, and the Ipswich River Watershed Association.

The culvert replacement was the first project of this magnitude for the Nor’East Chapter. While it resulted in tangible improvements to the habitat, the chapter realized benefits as well. A true learning process, the chapter was able to identify and tap internal resources without whose expertise the costs of the project would have been prohibitive.

565 volunteer hours went into the replacement, and the work of a handful of chapter members warrants special recognition: Overall oversight of the project fell into the capable hands of Greg Murrer; Jim MacDougall conducted wetlands services at the site; Mike O’Neill provided all engineering work; and Chett Walsh provided general project and construction management.

The chapter is proud of the replacement culvert, and it’s ready to capitalize on the accomplishment and move forward to the next big project. 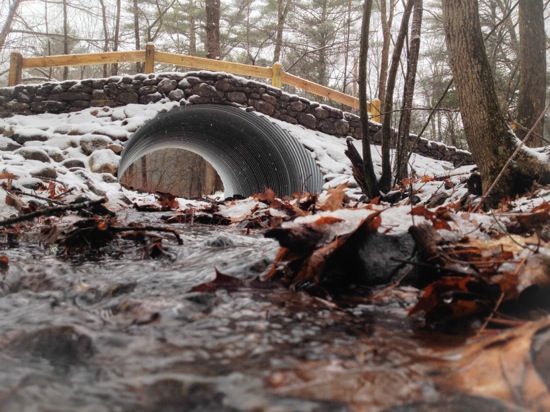